How good to hear Shirlene share from Psalm 91. The promises are of protection and security, but they are conditional; they are for those who ‘dwell under the shadow of the Almighty’. Shirlene read it from the AV, and told us how the Lord had spoken to her through that psalm. Then she read it from the Passion Bible, to bring out more clearly the personal nature, and the fact of relationship with our ‘Almighty Father’.

Even with several away, there was a good crowd.

There was testimony of answered prayer. Moira had had a hospital appointment, at which she was told her eyes had not deteriorated. In fact, the pressure within them had fallen significantly, which was unusual in such conditions, and good news. Rod had had an ultrascan, and was told a lesion which could have been dangerous, was “nothing to worry about”.

Bob led us into a heavenly place with praise and worship. Rod led breaking of bread, Malcolm gave an update on midweek meetings (starting 16th September), Wendy read the opening verses of Psalm 103, and Bob gave 2 words of knowledge.

We continue to pray for Sue P, waiting for treatment and in pain. We pray for Billy and Wendy; we would like to have prayed for them at a meeting, but they have been unable to attend for a few weeks, and leave for the USA, or France, possibly, in around 10 days.

We look forward to welcoming Jonathan and Paige Squirrell on 3rd December, who will bring a word that morning. Other guests include a couple on 3rd October, who hope to start a house church in south Norfolk, and on 12th September, a guest ours, staying for the FGB dinner.

Our next meeting is next Sunday, 5th September. 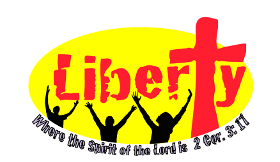 Get in Touch with Liberty